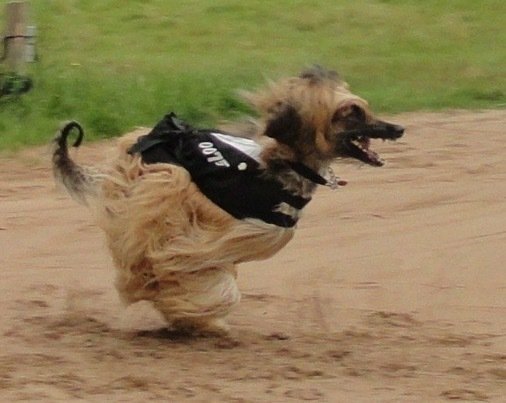 I love this video so much, makes me smile every time i watch it. I'm pleased to say our dogs are filmed here, they are Amenti, Ayesha and Kabul. Ayesha is the afghan hound on springs, on the left hand side, jumping up and down like a 'Jack In A Box'. Supporting all the other racers.The Affies get so excited as the others race and can often be seen in line, standing at the fence like a row of very hairy human beings jumping up and down and screaming with delight as their friends race by. Some have been known to leap right over the fence (although this is not to be encouraged as they could get seriously hurt as the hare passes by). Ayeha always cheerleads the others, there is no stopping her. She loves racing and is often seen jumping for joy. She is with her dad Taff and her brother Kabul (wearing the pale green and black ribboned jacket). They are both very enthusiastic racers. Running in the third race is Amenti, racing Solo she is wearing a light blue jacket. As she is the oldest of our Afghans she only does a 100metres, as the 260 metres is much too far for her. I'm on the filming also running on the grass  in a pink t-shirt and jeans to collect her at the end of the race. Both Kabul and Ayesha are in the fifth race. And as usual Kabul beats Ayesha by several lengths. Great little racer that he is.....WAS......!

This was filmed in 2009. Since then, our beautiful little boy had learned to Cheat...! Instead or running the full distance around the track as he used to do with such grace, he now jumps onto the grass and cuts the corners off to try and catch the hare on the other side. He now spends more time off track than he does on....!!! It is proving to be a very hard habit to break. We were never able to cure him of this habit. And they say Afghans are stupid...! Not true he worked out how to catch the hare without tiring himself too much. I am glad to say however, that his little sister took over the mantel and proceeded to beat the pants off him every time, probably why he started to cheat in the first place....! Lol. The races our dogs ran were for their enjoyment and for the sheer pleasure of watching our hounds run free, as this alas, was the only place it was safe for them to do so.